Home | Others | AMERICAN APPAREL: said to be considering sale

HEAVILY indebted US distribution group American Apparel, which proposes a broad selection of innerwear, is rumoured to be considering a sale. Founder and former CEO Dov Charney is believed to be among potential bidders. Since the company exited Chapter 11 in February 2016, it has said several times that different development strategies were being considered. More recently, it announced that a production unit for knitted garments in Los Angeles would be closed in October. 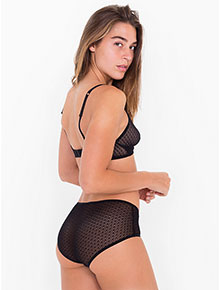 Ever since he was ousted from the post of CEO, Charney has been scheming to win back control of the company. It now looks as if his chances of doing so are improving.