YET another world soccer superstar, James Rodriguez, is to lend his name to a collection of men’s underwear following a licensing/endorsement deal concluded with Colombian apparel brand Bronzini. Labelled J10 James, the new range is already available from Branzini’s retail shops and online store while arrangements to wholesale the collection are being finalized to achieve world distribution. 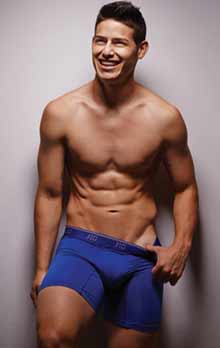 The CR7 label applied to the Ronaldo underwear range refers to his shirt number in the Real Madrid team and the J10 label of the Rodriguez collection has the same recognition factor. The third soccer superstar underwear label, a marketing trend initially launched by David Beckham, promises to be as successful as the first two if Bronzini exploits to the full the international sales opportunities.