Home | Others | FRANCE: burkinis banned by some resorts

FRANCE: burkinis banned by some resorts

STARTING with Cannes earlier in the month, five French resorts banned during August 2016 the wearing of burkinis on their beaches. Among the various reasons given for the ban are a threat to public order, hygiene, water safety, morality and being a sign of allegiance to terrorist movements. In other words, any reason that does not specifically relate to socio-political influences. 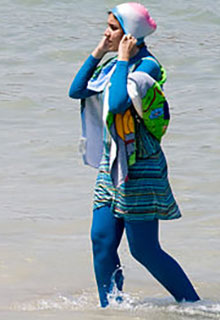 French locals as well as tourists should note that normal street clothing, a viable alternative to burkinis for women wishing to protect their modesty, remains legal as beach attire and for enjoying a dip.