ACCORDING to figures quoted by broadcaster RTL, 2013 swimwear sales in France rose by 36 per cent to reach a total of EUR 492m. At EUR 27, average per capita spending on swimwear was the highest in Europe. The average renewal rate was given as two years and seven months. 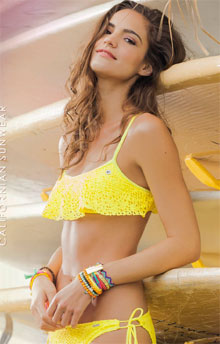 The reported comeback of 1-piece suits could encourage women to renew their swim wardrobe this year, keeping consumption at a higher level.