THE US underwear brand Frigo, that produces and markets innovative microfibre underwear for men, is preparing to launch a premium line designed by popular rapper Curtis “50 cents” Jackson, who has also invested in the business. Labelled Frigo Crown, the line will be in stores for summer 2015 at prices starting at USD 100 and will also include T-shirts. Frigo founder and CEO Mathias Ingvarsson commented: “50 is a dream partner for Frigo, and we couldn’t be happier that he is designing his own line. He is amazingly creative and his attention to detail is immaculate, which will be transparent in his collection” 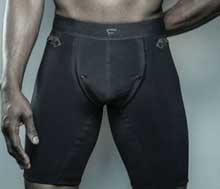 50 Cent is one of the world’s best selling rappers and the label could, in time, sell as many pieces of underwear as he has sold albums in his career, which is estimated as 30 million.