THE ELEVENTH edition of the Interfilière Shanghai salon for bodywear production supplies, to be staged on 12 and 13 October 2015 in the Shanghai Exhibition Center, will be marked by the introduction of a number of new features. The seven sectors of the show are to be renamed as at the Paris edition, one of the two separate trend forums will cover only beachwear while the other will be devoted to intimates, loungewear and sportswear while the two major world suppliers of elastane yarns, Invista and Hyosung, will each have their own separate pavilion featuring Lycra and creora fibres. Finally, in addition to the full seminar programme covering key elements of the market, the workshop programme has been refined to cover Trend for Sales and Marketing, Trend for Designers and Brand Building. In 2014, the salon featured 275 exhibitors and attracted 7’300 visitors from 53 countries, of which 76 per cent came from Mainland China. 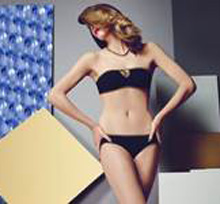 Indications are that this year’s edition will show further growth in terms of both exhibitors and attendance.