ACCORDING to figures quoted by intimate apparel trade fair Immagine Italia & Co, exports of Italian intimate apparel rose by 6.1 per cent in the first ten months of 2014 to reach a value of EUR 2.39m. Despite a 4.1 per cent decline, France remained the major market for Italian brands, accounting for 11.9 per cent of exports. It was followed by Germany (9.9 per cent), Spain (8.2 per cent) and the UK (7.7 per cent). Exports to the US rose appreciably (+12.5 per cent), as did shipments to Asia (+21.3 per cent) and the Middle East (+ 3.7 per cent). Statistics also showed that the intimate apparel manufacturing sector in Italy had contracted appreciably, by 18.1 per cent, in the five years to September 2014, by which time it counted 1’875 active companies. 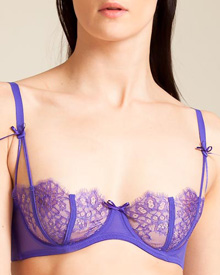 Although comparative figures were not supplied, it is probable that swimwear accounted for a larger proportion of Italian exports than lingerie.