A SURVEY of consumer attitudes to purchasing swimwear established that 69 per cent of Italians found the experience stressful because they believe that their body is not in appropriate shape. The findings of the study, which involved 1600 Italian men and women between 18 and 60 years of age, showed that 56 per cent regarded trying on a swimsuit as a problem while 33 per cent said they were resigned to the necessity. Dieting or some other form of preparation was undertaken prior to shopping for swimwear by 44 per cent of respondents, with a further 29 per cent considering doing so. Only 27 per cent took no prior action. 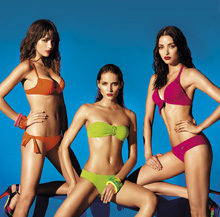 In the absence of comparable data from other European countries, we would guess that most consumers in the Mediterranean area share the Italian’s attitudes while consumers in more Northely areas are more prepared to overlook bodily imperfections. What is firmly established by other studies is that because trying on swimwear involves undressing entirely in a public place, even though in a cubicle, it is considered stressful by most women.