THE FIRST La Perla boutique dedicated solely to the new range of men’s innerwear that was re-launched earlier this year opened in Milan last week. The 100m2 store is located on the edge of the most exclusive shopping district in the city and proposes the full range of men’s innerwear, from underwear to sleepwear as well as the men’s beachwear collection. In December, two other boutique dedicated exclusively to men’s innerwear are to open, in London’s Burlington Arcade and in the Plaza 66 mall in Shanghai. The men’s range continues to be proposed by the brand’s major flagship stores, in Milan, Paris, Zürich and New York. 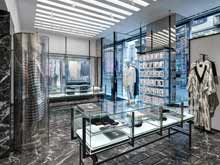 Although it is unlikely ever to equal the sales volume of La Perla products for women, the men’s range helps to emphasize the exclusive luxury character of the brand.