LATVIAN supplier Lauma Fabrics published 2014 results that showed sales down by 3 per cent against 2013, to EUR 38.32m, and profit down almost four-fold to EUR 1.026m. Investment in new equipment and technologies reached EUR 1.69m. In 2015, the company aims to boost sales to EUR 42.35m and plans to invest a further EUR 3.04m. The company that employs 530 people cites Belarus, the Baltic States, Ukraine, Poland, Russia and France as its major markets. 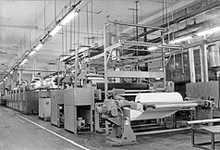 Since 2013, the company has lost some highly experienced members of its top management and has made at least one strategic decision that we believe will hamper its efforts to boost international sales. Consequently, it is by no means certain that it can improve its performance significantly this year and in 2016.