LEADING British distributor of intimate apparel Marks & Spencer added two styles of burkinis to its assortment of swimwear. The burkini full-length swim dress provides non-revealing total body cover and features lightweight fabrics that allow the wearer to swim in comfort. The S/S 2016 season marks the first time such garments have been proposed by the chain. Though intended primarily for Muslim women, burkinis are also worn by others that seek extreme modesty for religious or personal reasons. 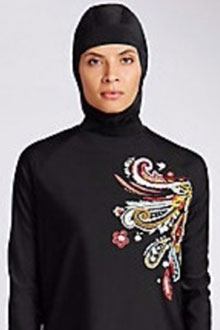 Distributors in other European country with an important Muslim population might also give serious consideration to the introduction of burkinis into their range.