A CHINESE man who had been stealing lingerie from women in his neighbourhood for years had stashed his haul above the false ceiling of several stairwells of the residential building where he lived. He was eventually found out when the accumulated weight of bras and panties caused the ceiling to collapse, bringing bras and panties raining down on residents. 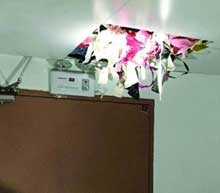 Despite much improved reporting and more powerful computers, there are still some precipitations that local meteorological offices fail to predict.