SEEKING capital to start production of a new bra concept described here on 16 February, the founders of Trusst Lingerie launched a crowdfunding campaign to raise USD 25’000. With 25 days to go, the response has already exceeded the target, which implies that production will start soon. Joint founder Sophia Berman explained: “This idea came from our personal experiences in finding bras. We wanted to offer women functionality and support. About a year ago, we put our heads together to solve this problem. We started off from a purely engineering standpoint: breasts are heavy, and bigger breasts are even heavier. Heavier things need more support than lighter things. Current bras are designed without weight in mind, which is why most of them fail.” 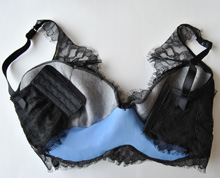 The rapid success of the campaign confirms that there is considerable potential demand to be met. This suggests that, providing the bra is promoted adequately, it is capable of winning appreciable market share from established brands in the US. Also, since potential demand is likely to be as great in other countries, bra manufacturers there might consider seeking a licensing deal.