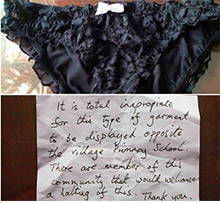 The innerwear vigilant who wrote the note appears to believe that young children are not aware that adults use underwear.