STATISTICS analysed by Taobao, the major online store in China, showed that B-cup size bras bought in 2014 accounted for 39.9 per cent of all bra purchases, with little change against preceding years. Sales of C-cup bras rose to account for 13.1 per cent of all purchases, against 8.9 per cent in 2011, while sales of A-cup bras slipped to 21.5 per cent of purchases, against 25.26 per cent in 2011. Further, according to Taobao, more than 80 per cent of B-cup bra buyers are in the low or medium income category while 80 per cent of those buying G-cup bras enjoy medium to high income. The figures also indicate that unmarried women tend to buy larger cup sizes than wives. 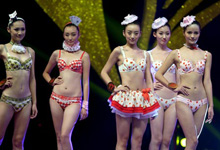