BRATIONALISM: bra supports not only breasts

CATALAN women who support the province’s efforts to win independence from Spain can now buy a bra featuring the Catalan flag. Labelled SostenCat, which roughly translates as CatalanBra, it is being distributed by a pro-independence boutique in Barcelona that suggests it should be worn at community festivals, during summer nights, or at the beach. 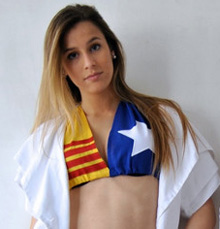 Catalan women can now paraphrase American patriot Stephen Decatur, who expressed allegiance to his country, right or wrong, by proclaiming support for Catalonia, right and left.