Home | Others | DOGI: return made into the black in Q3

DOGI: return made into the black in Q3

FREED from its debt burden after the financial re-structuring that followed its acquisition by Sherpa Capital, intimate apparel fabric producer Dogi declared a third quarter net profit of EUR 12.8m against a loss of EUR 1.1m in the same quarter a year earlier. At the end of September, its order book position was up by 18.9 per cent against the same time in 2013. The company also reported that its sales efforts in Asia had overcome the negative effects of the closure of its plant in China and saw the likelihood of interesting prospects there. In the USA, where its EFA subsidiary had recorded a slight sales dip in its third quarter, Dogi expected Q4 sales to revive strongly.  The company’s buoyant predictions were confirmed at the MarediModa salon in Cannes earlier this month. There, its stand, which was considerably larger than last year, was said by the company to have been visited by many more buyers of swimwear and innerwear fabrics than for some years past. The resulting higher level of sampling from the S/S 2016 collections suggests that customer confidence in the future prospects of the revived company and its new management team is rapidly gathering strength. 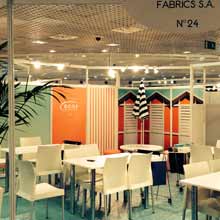 It now appears that, as evidence mounts that the Dogi concern is winning back its former customers and attracting the interest of new ones, the company is entering a virtuous circle, with growing confidence breeding further confidence.