Summary of news published since Week 08-2016

FOR SOME years past, we have published news relating to developments in India more frequently than in other BRIC countries. This reflects the country’s potential growth in the intimate apparel sector, as shown in this week’s news. In recent years, the branded innerwear sector in India has achieved considerable expansion and the country has made much progress in the supply of production capacity. So much so that it is expected to surpass other Asian country’s as a source of production for brands as well as for private labels. Taken together, these developments suggest that India will become a significant market for imported lingerie within the time scale usually applied to a brand’s marketing strategy. But, because of India’s cultural and linguistic links with the UK, and by extension with the US, brands based in other countries will find it more difficult to win the acceptance of Indian consumers. For this reason, they need to start promoting their labels in India very soon if they are to share in the probably considerable increase in demand for imports.

EXHIBITIONS– what to see and where to trade

THE INDIAN government announced that it will invest the equivalent of nearly EUR 4bn to help in the development of the country’s textile industry. The investments announced relate mostly to the setting up of new textile-oriented industrial parks. In line with a new government strategy, emphasis will be placed on projects that involve high added value products for exports as well as on projects that promise to reduce environmental hazards.

WACOAL: retail stores in India to be opened

HUNKEMOELLER: Indian expansion gets under way

FIGURES published by the national statistical office (INE) show that the 3 per cent rise in consumption recorded in 2015 contributed significantly to the 3.2 per cent GDP growth achieved that year. They also show that investments rose by 6.4 per cent while exports were 5.4 per cent higher and imports strengthened by 7.5 per cent. Equally important, the statistics show that there was a net growth of 495’000 people in full time employment that year.

Indications are that comparable progress will be made in 2016, providing more opportunities for innerwear sales.

AMONG the novelties launched for A/W 2017/18 by Italian yarn producer Ghezzi are reinterpretations of classic stretch yarns incorporating Roica Eco Smart elastane from Asahi Kasei in blends with viscose, Cupro and EcoFriendly fibres, the last being made with cotton linters and bamboo filament. Also new is a ceramic polyester stretch yarn with Roica elastane.

The new products provide knitters of fabrics for intimate apparel with a broader range of options to achieve selected aspects of performance.

TROUBLED Spanish nylon yarn producer Nylstar requested from the responsible authority approval of a plan to lay off temporarily 175 of its employees from 10 March to 10 July. Late in 2015, the company had taken steps to cut its workforce by 13 per cent in an effort to prevent failure of the company. 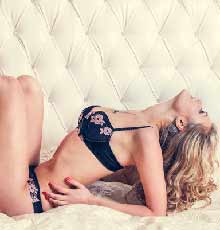 Under the present circumstances, it is difficult to imagine what further steps might be taken to avoid failure, a development which would ease considerably pressure upon other suppliers of branded nylon yarns.

ALTHOUGH the CR7 men’s underwear brand endorsed by soccer star Cristiano Ronaldo allowed Danish manufacturer JBS to start exporting to 55 countries, tariff issues and distribution problems later caused many markets to be closed. The company had expected to double its sales within two years but suffered a 10 per cent decline to DKK 200m in its latest fiscal year. Nevertheless, CEO Michael Alstrup told the local press that he plans to set up further endorsement deals with sports stars in order to boost sales.

Because securing an endorsement from a sports star is only the first step in a complex marketing procedure, the company’s current strategy remains a work in progress.

INTIMATE apparel brand Lisca, which was created in Slovania in 1955, raised its net profit by 15 per cent in 2015, to EUR 2.5m, despite almost flat sales of EUR 31.2m that year. The brand employs 750 people in eight countries and said that it remains optimistic about its future prospects.

The brand was one of the first in its region to achieve wider recognition among professionals in Western Europe and it should continue to enjoy “first mover” benefits in the years to come.

AGAIN in 2015, luxury lingerie concern Van de Velde’s audited report showed higher like-for-like wholesale sales, that year up by 6 per cent to EUR 209m. Expressed in USD, sales of the Rigby & Peller chain in the US, which formerly traded as Intimacy, declined again, by 9.7 per cent but generated sales in EUR that were 7.2 per cent higher. Retail operations in Europe produced a like-for-like increase of 5.8 per cent, mainly thanks to strong performance in Germany and the Netherlands. Consolidated recurrent EBITDA rose by 7.3 per cent to EUR 61.9m, thanks to stronger wholesale sales and improved margins.

The continuing strength of wholesale sales reflects the ever keener demand for more exclusive luxury lingerie.

INDIAN textile company TT Ltd revealed plans to launch a premium brand of underwear and to diversify into fashion outerwear. The proposed premium brand is for distribution in the Middle East and Africa as well as in the home market. To meet its expansion objectives, the company intends to make structural and organizational changes to boost its annual growth rate to 20-25 per cent. Interesting export opportunities for cotton garments are seen in Vietnam, Ethiopia and the US. The sales objective is to reach annually USD 218m by 2020.

To be sure of reaching its 2020 sales target, the company will need to launch and to start developing its premium brand within the coming twelve months.

SPANISH underwear brand Punto Blanco continued to expand its retail network internationally with the opening of a franchised store in Dubai and an additional store in Egypt, to be followed shortly with stores in Iran and the Philippines. The brand is attempting also to establish itself in the US and it is to exhibit at trade fairs there in 2016. In Spain, it operates 11 owned stores and 22 franchises and began last year to update the visual image of its outlets.

Despite its efforts to establish itself as an international player, the brand continues to depend largely on sales in its home market.

PUNTO BLANCO: moves back into black

PUNTO BLANCO: expansion in China to be maintained

PRESENTING its results for 2015, Delta Galil said that they marked the sixth consecutive year of growth. Sales of the former private label manufacturer that now operates its own innerwear brands rose by 10 per cent in original currency to USD 1.08bn and operating income before one-time items rose by 2 per cent to USD 75.5m. CEO Isaac Dabah commented: “While 2015 was a challenging year for the global economy, we benefitted from our business model, which combines a diverse blend of branded and private label products, an expanded global presence and a range of market segments. Among our key highlights during the year, we improved our performance at Delta USA and in the global upper market, and in addition we acquired the P.J. Salvage brand. We expanded our prominent portfolio of licensed brands with men’s and ladies’ underwear licenses for Columbia Sportswear, a sleepwear and intimates license for Juicy Couture, and an exclusive license for Puma sportswear brand products in Israel – all of which will contribute to our growth potential in future years.”

Already an international player of note, the company appears to be going from strength to strength.

IRISH low-cost fashion chain Primark, which is much appreciated in the UK as a source of lingerie and underwear, confirmed that it is preparing to expand into Italy. The chain already has stores in all major European markets and its Spanish operation with 41 stores is second only to that of the UK with 170 outlets.

If the Italian operation grows to near the size of the Spanish chain, or surpasses it, it could win an appreciable volume of sales from established specialist chains there.

ORIGINALLY announced in December 2015, the acquisition of the Hunkemöller lingerie chain by private equity group Carlyle has now been approved by EU competition officials. The Commission said that the acquisition would have only a negligible impact on the two lingerie concerns already owned by Carlyle. Earlier, Hunkemöller CEO Philip Mountford had commented: “Hunkemöller has seen substantial growth over the last five years developing from a physical retailer into becoming the leading European omni-channel lingerie brand. PAI Partners have been instrumental in helping us through this journey. The Carlyle Group will work with us to continue to enhance our strategic vision and grow the business further as we leverage Carlyle’s global network, its extensive experience and expertise in the retail fashion sector. ”

Now that strategic decisions can be taken, it is likely that the chain will resume its expansion throughout Europe.

HUNKEMOELLER: Indian expansion gets under way

CASUAL wear chain Esprit, that is also an important distributor of intimate apparel, announced first half results that showed a 13 per cent decline in sales, to EUR 1.09bn. This led to a loss of HKD 238m, equivalent to EUR 27.6m. A year earlier the company had declared a net profit of HKD 47m. CFO Thomas Tang commented that the results were much in line with predictions made at the end of the preceding full year.

The chain still has a long way to go before it can resume to strong performance of earlier decades.

THROUGH new features including a prototype fashion show, the next edition of the Interfilière Hong Kong salon, on 15 and 16 March 2016, will support the revival of interest accorded to traditional corsetry with the presentation of concepts including Lingerie-to-Wear and Shaping Seduction. These concepts will illustrate the current trends that move away from seamless, padding and moulding technologies towards cut and sew pattern making. This is said to be strongly influenced by the international trend that favours the boned corsetry look, leading to designs that combine good appearance and comfort with an expressive and sexy aura. The project is supported by many of the leading suppliers in Europe and Asia presenting their collection at the salon.

The new emphasis on traditional corsetry promises to influence the look of many innerwear collections for the coming seasons.

WITH 70 exhibitors presenting some 200 collections, German trade fair Dessous Wallau attracted over 550 buyers to its latest edition, which featured collections for A/W 2016/17 and was staged from 13 to 15 February 2016. According to the organizers, both exhibitors and trade visitors expressed their satisfaction with the event, where loungewear is said to have aroused much interest.

Although the show claims to be the most important innerwear trade event in Germany, it has yet to show its ability to attract a significant number of buyers from other countries.

REPRESENTING a late opportunity to sell swimwear fabrics for the S/S 2017 beachwear collections, the Munich Fabric Start salon was described as a satisfactory event by the MarediModa exhibitors who, this year again, staged a fair-within-a-fair during the German fabric salon. These reported that positive results were achieved and promising contacts made at the event.

The concept adopted by the beachwear fabric salon, which consists of a core event in November supported by a presence in other salons during the following months, appears well adapted to the international marketing of swimwear fabrics.

AUSTRALIAN newspapers reported that local police have seized drugs worth AUD 1bn that were hidden in imported silicone bra inserts. This is said to be the country’s largest ever seizure of liquid methamphetamine.

Surprisingly, none of the newspapers used “Pushers Supplied from Push-ups” as a headline for their report.