ANNOUNCING the impending reduction of its workforce in response to weakening sales in Russia, Maison Lejaby CEO Alain Prost said that the opening of retail stores under the brand in France and other countries was being considered. M. Prost told the works committee that, as a result of the crisis affecting Russia and Ukraine and subsequent trade sanctions, exports to Russia had slumped by 30 per cent, which called for cost reductions and new measures to revive growth. As a first step, it is proposed to cut the workforce by nearly a third, from 188 people to around 130. The possible new measures include the creation of a retail network. 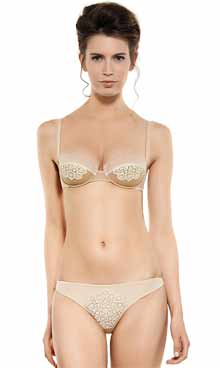 Rather than the Couture collection, which promises high margins on limited volume, the retail operation being considered is likely to feature the main collection, possibly with the Elixir plus size collection. Also, unless private equity fund Impala raises yet further its stake in the business to provide more cash, which seems unlikely at the moment, the retail operation is likely to be based on franchising or comparable partnerships.