RETURNING to their house one afternoon, a couple in Melbourne, Australia, found there a female intruder. They locked the woman in a room and ‘phoned the police. While waiting for the arrival of a patrol car, the man went to change his clothes. During his absence, the intruder broke a window with a beer can and ran into the street. Hearing the noise, the man ran out in his underwear and caught the intruder a second time. He then asked his wife to hold on to the woman while he went to put on some clothes. As soon as he was gone, the intruder struggled free and made her getaway for good. 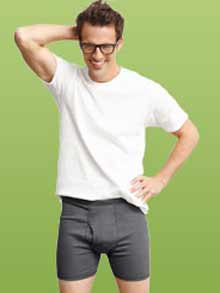 Many brands claim that their underwear provides freedom of movement, but they mean for the wearer rather than for law-breakers.