THE SPANISH innerwear chain operated by Inditex under the Oysho label is focusing more closely on the range of activewear it first launched in 2012 and that is now said to be one of the fastest growing elements of its assortment. It recently converted one of its lingerie stores in Barcelona to sell exclusively activewear. Further, the proportion of store space devoted to active wear is being increased in other stores. 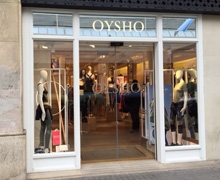 This evolution is in line with the growing interest being shown by younger consumers in more casual attire.