A BRA that has been referred to as bionic is coming closer to reality. Such a bra, which automatically tightens in response to breast movement thanks to intelligent components, was discussed at the 9th Australian Biomechanics Conference (ABC9) at the University of Wollongong (UOW) from 30 November to 2 December. Professor Julie Steele, Director of Breast Research Australia (BRA), said that the development of new technologies, such as 3D printing, has allowed the assembly of new structures that incorporate sensing and artificial muscle capabilities. When development is completed, a bionic bra that provides maximum comfort when the wearer is at rest, will tighten to provide adequate support when it senses she is exercising more violently like, for example, running to catch a bus. 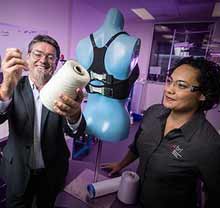 Such a bra has the potential to become a world best seller and the time to make a bid to exploit the technology is now.